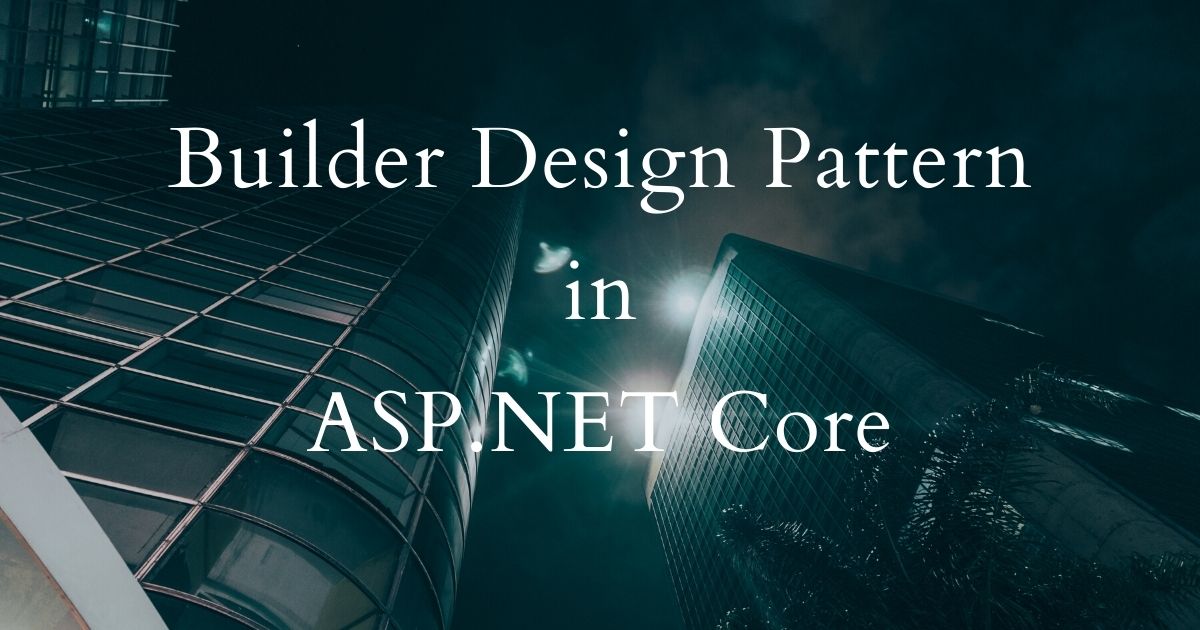 Imagine you are building an application that requires the construction of a complex object which has many fields and nested objects that you need to initialize one by one by going through many boring and laborious steps. You can initialize all fields and nested objects by passing dozens of parameters in a monstrous constructor or you can create a huge list of overloaded constructors with all possible combinations but these solutions will not be elegant. You can also create a set of subclasses to cover all combinations of the parameters but you will end up with a considerable number of subclasses. In this tutorial, I will show you how to use a design pattern called Builder to solve this problem by following an easy step by step approach.

What is a Builder Pattern?

Let’s assume that you are creating a House object and to build a simple house you need a constructor with walls, floors, doors, windows, and roof so a constructor will look something like this:

The object creation using the above constructor will look similar to the following:

For a larger and more expensive house, you may also need a heating system, electrical wiring, swimming pool, etc. so the above constructor needs to introduce more parameters as follows:

Most of the simple houses don’t need all those extra features so those additional parameters will remain unused nine out of ten times.

The builder pattern divides the object construction into multiple steps such as buildWall, buildRoof, buildDoor, etc., and to create an object, we can execute one or more of these steps. This gives us freedom because now we can extract the object construction code from the main class and move the code to separate small objects called builders. We can then use the builders we need to construct an object.

The main objects used to implement a builder pattern are following:

Builder – This interface declares all steps required to create an object. The actual implementation of each step is usually defined in concrete builder classes.

ConcreteBuilder – These classes provide different implementations of the construction steps. They also define a method that returns the final product.

Product – This class is the actual complex object generated by the builder pattern. This class can belong to the same or a different type of class hierarchy

Director – This class defines the order in which to call construction steps. This class can also define the algorithm or logic to generate the final product object. This class normally has an encapsulated builder object which can be passed either using the constructor or a method, e.g. setBuilder.

Pros and Cons of Builder Pattern

Imagine you are building a web application of a web hosting company and you want to implement a pricing plans page that will show different plans such as Basic, Enterprise, etc. Each pricing plan can have lots of features e.g. Disk space, bandwidth, database size, etc. Each plan can be considered as a complex object and the features in the plan can be built as steps. To make things more interesting, I will also introduce a custom pricing plan to show you how to build a custom object by mixing different steps in any order you want.

The following diagram shows the Builder pattern example we are going to build.

Next, create the following Plan class in the Models folder. This class will represent the hosting plan with a features collection. I also implemented a method AddFeature to easily add features to a plan.

Next, create the following builder interface that has methods to create different features of the hosting plan. There is also a GetPlan method that will return the completed plan.

Next, we need to create concrete builder classes that will implement the above IPlanBuilder interface and will provide the specific implementations of the building features to create the final hosting plan. We can have several variations of concrete builders and each one of these variations can be implemented differently. For this example, let’s create two hosting plan builders e.g. Basic and Enterprise.

The BasicPlanBuilder will define hosting plan features as per its requirements.

The EnterprisePlanBuilder will define hosting plan features as per its own requirements.

The client application can create objects using the builders directly but it is a good idea to create a Director who is responsible for executing the object building steps in a particular sequence. The Director can also be helpful in scenarios where we want to produce products according to a specific configuration. In our web hosting plans example, the Director class can be used to build different hosting plans.

Let’s create the following IPlanDirector interface in the project. It has two methods to build Basic and Enterprise hosting plans and a method that will allow us to provide different types of builders. The director can work with any type of builder passed to it from the client.

Let’s implement the above interface in the following PlanDirector class. Notice how we are building all basic and enterprise features step by step in a particular order. Each step will add a specific feature, e.g. Diskspace, Database, etc. to the plan. The enterprise plan will add one additional feature SSL which is not available in the basic plan.

In our example application, we want to build and return multiple pricing plans so let’s create the following PricingPlansModel class that will hold all these plans for us. We will pass the model to the Razor view to display pricing plans on the page.

The client code needs to create a builder object, pass it to the director, and then initiates the construction process. The final product is then retrieved from the builder object since the director isn’t aware of and not dependent on concrete builders and products.

Open the HomeController and inject the IPlanDirector in the constructor of the controller. Inside the Index action method, create the BasicPlanBuilder object, pass it to the director using the setPlanBuilder method, initiate the building process by calling the BuildBasicPlan method, and finally get the complete plan using the builder’s GetPlan method.

To display the pricing plans, you can add the following code to the razor view page.

Run the project and you should see the Basic pricing plan as shown in the following screenshot.

The razor view markup will also be quite similar and this time we need to render enterprise plan details and features.

I already mentioned above that we don’t need to use the director to implement the builder pattern. We can also create objects using the builders so let’s create a custom pricing plan using this approach. Create an object of the BasicPlanBuilder class and mix and match the features you need to build your custom plan. For example, I can only add the Disk space and bandwidth features in my custom plan and can omit the Database and SSL features.

To display the custom plan, you can use the following markup in the razor view page.

Run the application once again and you should see all pricing plans as shown below.

The Builder pattern lets you construct composite trees or other complex objects step by step, using only those steps that you really need. This makes our code very easy to understand and maintain. I hope you have found this post useful. If you have any comments or suggestions, please leave your comments below. Don’t forget to share this tutorial with your friends or community.

A Developer’s Guide for Creating Web APIs with ASP.NET Core 5

How To Support Multiple Versions of ASP.NET Core Web API