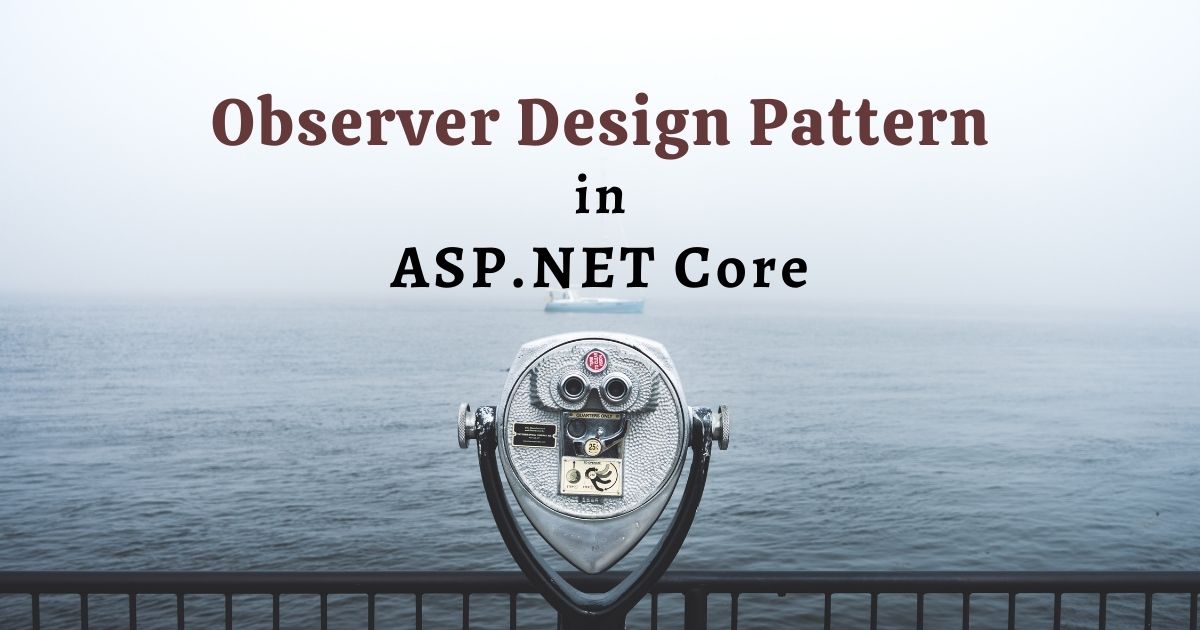 Imagine you are building a modern event driven application for a news agency that notifies multiple news channels, online websites, and media houses as soon as they have the latest news about any major incident that happened anywhere in the world. You must need to architect your application in a way that not only you can maintain the list of all interested parties but can also notify them all. This is exactly the use case in which you can use one of the most common and well-known design patterns called Observer. In this tutorial, I will give you an overview of the Observer pattern with an example implementation in ASP.NET Core and C#.

What is Observer Design Pattern?

The Observer is a behavioral design pattern and it allows some objects (known as subjects or publishers or observables) to notify other objects (known as observers or subscribers) about the changes in their state.

The observer pattern is a software design pattern in which an object, named the subject, maintains a list of its dependants, called observers, and notifies them automatically of any state changes, usually by calling one of their methods.

Following are some key points to remember about the Observer pattern:

When to use Observer Design Pattern?

The Observer pattern is pretty common in programming languages such as C#, Java, etc. because it provides a neat and well-tested design for applications in which multiple objects are dependent on the state of one object.

Some real-world use cases can be following.

How to Implement Observer Design Pattern?

To show you a real-world implementation of the Observer pattern, I picked a simple use case in which we will perform the following actions.

The following diagram will give you an overview of what we are going to implement.

The class has some basic order related properties along with the OrderStatus property which is an enumeration. Create the following OrderStatuses enum in the Models folder.

Create a fictitious order object within the Index action method of the HomeController and return the order object to the razor view page.

Implement the following Index.cshtml Razor view page that will display a simple form to will allow the user to update the order status. The list of statuses is also converted from the enum to a SelectList that we bind with the HTML select element.

The form will submit the order information to the following Index method and we will implement this method at the end of this tutorial.

Run the project and you should see the following Update Order form in the browser.

We are now ready to declare the observer (subscriber) interface. At a bare minimum, it should have a single update method that can be called by the subject (publisher) every time it needs to notify the observer.

Create a Services folder in the project and add the following IOrderObserver interface in the folder. I also passed the Order object as an argument so that the Update method can also receive the order information when it receives the notification.

Let’s say you have a business requirement to send an email to the customer every time the order is updated. You can easily add this feature in your application by simply creating an observer class that will implement the above IOrderObserver and will write the code to send emails. Here is an example of such a class.

Now let’s assume, you have a new requirement that you also want to send an SMS every time the order is updated. All you need is another observer class similar to the above class but this time it will have the code of sending SMS to customers. Here is an example of such a class.

I am sure you have the idea now that you can create as many observers as you want according to your requirements and each one of these observers will perform their own tasks whenever they will receive the notifications from the subject that the order has been updated.

Create the following IOrderNotifier interface that will act as the publisher interface in our example.

Now we need to decide who will implement the above IOrderNotifier interface and will maintain the list of subscribers. It is usually not a difficult decision to make because in a real-world application, we may already have an application service that is responsible for updating orders and that service is the most suitable candidate for acting as a publisher. Let’s assume in our application, we have the IOrderService interface with the UpdateOrder method, we can derive it from the publisher interface IOrderNotifier as follows:

In the above implementation, I first declared a List<IOrderObserver> that will maintain the list of subscribers (observers)

The Attach and Detach methods are self-explanatory as they are simply adding or removing subscribers to and from the list.

We are now ready to test our implementation. Register the above OrderService in the Startup.cs file as follows.

Run the application in the browser and choose any order status e.g. Shipped and click the Update button. You will notice the following statements in the Output window. You can easily see that both of our subscribers are notified and they printed their statements.

Now let’s say, you don’t want to send an SMS, you just need to unsubscribe the SMS observer object by calling the Detach method as shown below.

Run the application again and click the Update button by selecting any order status and you will notice that the notification is sent to only email observer.

The Observer pattern is useful and can be used in situations where one object has to observe another object and need to receive notifications when the state of another object changes. I hope you have found this post useful. If you have any comments or suggestions, please leave your comments below. Don’t forget to share this tutorial with your friends or community. You can also download the complete source code of this post using the Download Source Code button shown at the start of this post.

A Step by Step Guide to Bundling and Minification in ASP.NET Core